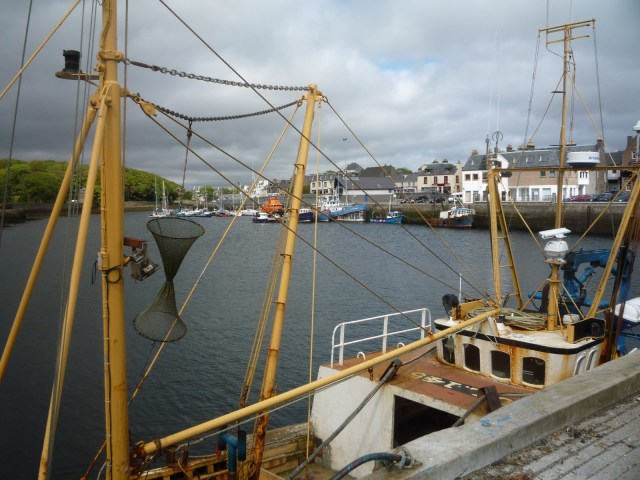 Stornoway as seen through the rigging of a fishing vessel with two cones
(joined at their apexes or apices) and hung vertically,
which is the daytime signal to inform others that the vessel is currently fishing… 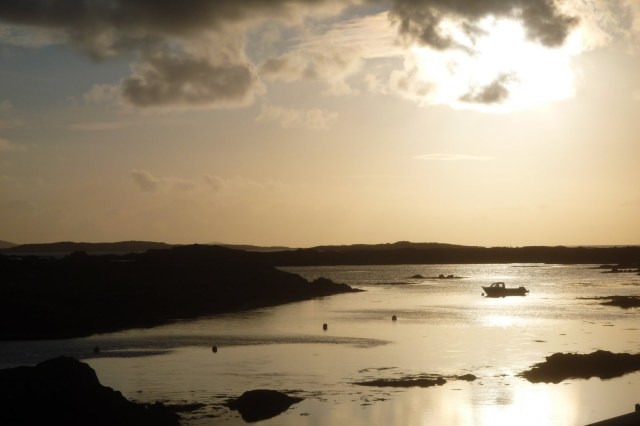 Five-Thirty in the Evening, Looking Towards Kerrera Fom Oban
Tarbert, Isle of Harris 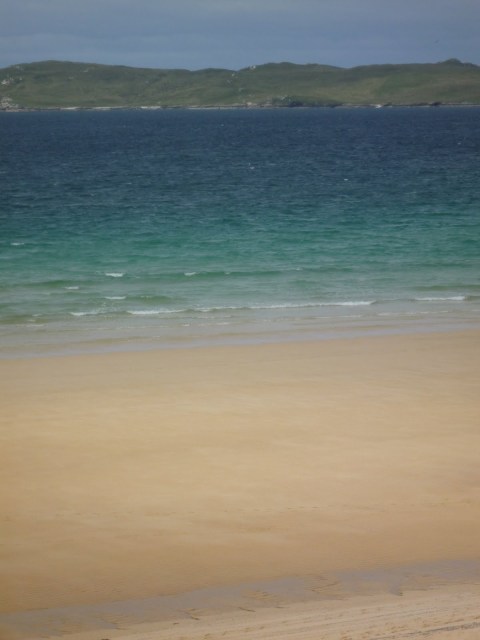 I found this somewhat surprising sight at the start of the Bays of Harris.
Whilst there are beaches and machair on the West coast, the Bays must
be a somewhat daunting area for the helicopter to consider landing in.
The road appears be following an old track to the shore at Direcleit.

This ruin of part of a Blackhouse at Arnol shows the elements used in the construction of the walls. A pair of concentric, round-cornered, dry-stone walls are in-filled with a mixture of peat-mould and soil and then turfed. The roof structure rested on the inner walls so that water shed from the thatch kept the grassed area moist ensuring that the walls remained wind and rainproof. 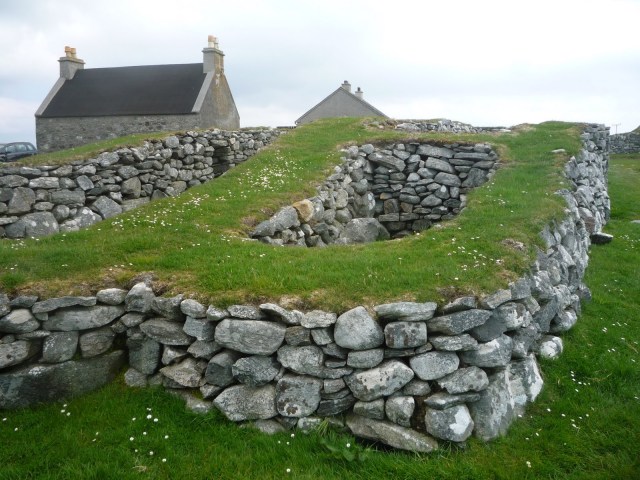 This structure is a superb combination of form and function, evolved hundreds of years before cavity wall construction was used in brick-built houses, and even longer before the introduction of insulation into the walls of such houses. An estimate of the labour involved in building these walls can be appreciated by considering that a cubic metre of soil weighs one metric tonne and that these walls are about one metre wide.

This informative page includes an image of a cutaway model of the Blackhouse at 42 Arnol:
http://www.undiscoveredscotland.co.uk/lewis/blackhousemuseum/

And then they said. ‘Too big!
Later it was ‘Why?’
Later still ‘How & Who?’
Eventually they said, ‘OK’
And Calanais’ stones are standing still. 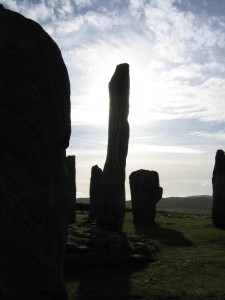 I thought I would ‘join the dots’ of various walks I had on Harris last year.

The first column is through the Bays of Harris but not along the ‘Golden Road’ which I travelled several times by bus instead. The list ends about 5 miles away from Roghadal.

Next is a short, but photogenic, stroll along the shore of Loch Stocinis.

The final column traverses the island from the East coast to that of the West via the ‘Coffin road’ and then heads Southwards to the town of An-t-Ob and its neighbours. I should explain that I walked from An-t-Ob to Roghadal following a ‘circular’ route and reiterate that these lists are merely a compilation of several separate excursions.

This light started work in 1900 so here we see recorded two of the first Light Keepers.

In time, it had six Light Keepers, three (as is the case in these two examples) living next to the light with their families, plus a local assistant and two part-timers from nearby Portnaguran.

Further information on this Light, and all the others of The Northern Lighthouse Board, can be found here:
http://www.nlb.org.uk/LighthouseLibrary/Lighthouse/Tiumpan-Head/

It is good to see someone from the Western Isles in this role, as was the case with James Matheson and his family’s birthplaces indicates that he served in Skye and Fair Isle before arriving in Lewis.

Similarly, John Milne appears to have been in Musselburgh and Scalpay, as well as back in his home town of Arbroath, prior to his arrival.

His Seaman Son, David, reminds us of the purpose of the Light Keeper; to ensure a safer passage for those whose lives took them away from the safety of the shore and into the arms of that sometimes gloriously beautiful , sometimes treacherously betraying, mysterious mistress of the deep.

Wandering & Wondering
Create a free website or blog at WordPress.com.